Added 3 years ago by vhm
51 Views
New artists are what will sustain and grow this scene. It is essential to develop and expose new talent and despite the challenges of doing such, MelodicRock Records continues to bring the best undiscovered artists to the ever hungry fans of all things melodic.

On November 25, one of Pittsburg’s most gifted singer/guitarists will make his mark. Please make room in your music collections for BRYAN COLE and his sensational debut album ‘Sands Of Time’.

Melodic rock fans have been in need of an album just like this – the classic sound of bands like Giant, Bad English, Survivor and both Pride Of Lions and Brett Walker – the latter two artists both included in the material that comprises Sands Of Time.

Bryan Cole - "I have to say that I took a lot of time and care in recording my debut album ‘Sands Of Time’ and I knew I would go through the same process in finding the right label home for my music. I'm proud and honored to be a part of the MRR family and all the talented acts on their roster. Andrew McNeice and Melodic Rock Records, truly cares about their artists and I'm humbled and honored that they gave me a chance to make MY music and give me the extraordinary opportunities that the label offers Sands of Time is truly the first album project that is so honest, so pure and so Me! Every musical and vocal influence from my earliest memory, through my adult life is shown ever so clearly in this record and I'm so proud of it!"

The whole idea for the record came from Bryan recording a demo of the classic Brett Walker/Carl Dixon song ‘More Than a Memory.’ The feedback was unanimous, with Bryan receiving very positive and encouraging responses.
“I knew I was on to something very special. I began searching and writing material with the hopes of finding enough great songs to record a EP or full length album. During the course of this grueling process, I had experienced many personal and life changing experiences. The loss of several loved ones had brought me to my lowest point emotionally and I felt I couldn't go on being creative and making music. Out of the blue, I received a message from an old friend in Nashville, TN that heard my demo and had an idea of the perfect person to hook me up with.”

That person would be none other than Jim Peterik from Survivor. Bryan grew up listening to Survivor, Journey and many other classic AOR/Melodic Rock groups of the late 70's and 80's, so working with Jim was a dream come true. Jim Peterik contributed four amazing songs to the project that followers of Jim will recognize quickly.

Bryan continued to look for more songs that fit his style and lyrically had the right substance that he was looking for. Songwriters Joie Scott, Larry King and Steven McClintock, graciously lent their writing talents to the project. Bryan decided to record a second great Brett Walker song and to complete the album, and together with his long time writing partner DJ Gleason the duo wrote two songs to round out the album.

In conclusion, Bryan elaborates on the album recording process: “In addition to all of the great songwriters, I wanted to bring in the right group of musicians to help in the recording process. My first pick was former Giant bassist Mike Brignardello. I've been a Giant fan from their first record and they have always been a major influence on my music. I contacted Mike through a mutual friend and he jumped at the chance to be a part of the record.

The recording took approximately one whole year, with recording all of the tracks in my home studio in Pittsburgh, PA and Mike Brignardello recording his tracks in Nashville. I then appointed my longtime friend and mix engineer Doug Kasper, to mix the record at Tonic Recording Studios in Pittsburgh. Throughout this process, I began friendly conversations online with various industry folks including Andrew McNeice of MelodicRock Records. I had expressed interest in finding the right label home upon completion of the record. I just had a great feeling that MRR, was going to be the right fit. I was right! After submitting some rough mixes, I was offered a record deal with MelodicRock Records!
The label appointed Nello Dell'Omo to do the artwork and design and JK Northrup for final mastering. Both are absolutely brilliant! I'm honored to have worked with them.

To sum things up... Sands Of Time is a true inside look of who I really am. The musical and vocal influences that helped to mold me into the artist I am today and who I will continue to learn from. The happiness and sadness, as well as the struggles. They are all grains of sand that make me who I am.....the beginning.” 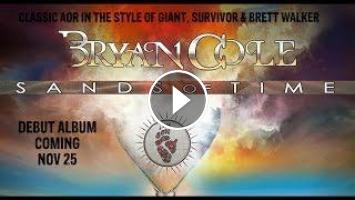 New artists are what will sustain and grow this scene. It is essential to develop and expose new talent and despite the challenges of doing such, Melo...