Added 3 years ago by admin
45 Views
One of Sweden’s legacy melodic rock acts House of Shakira are ready to deliver the best serving of Sour Grapes you’ve ever been fed.

Keeping the momentum going since lead singer Andreas Novak joined the band, Sour Grapes is the band’s third since Andreas’ 2012 debut. And as like the last album, the band has taken things to the next level, with more harmonies, more chorus hooks and more layers of everything….including for the very first time – keyboards!

Says frontman Andreas Novak: "A witty bio-update would be nice...just really can't figure out what...it’s the same line-up...Feel free to improvise on that one, Andrew - it doesn't even have to be true, just as long as it's good."

Label CEO Andrew McNeice: "Following Andreas’ instructions, I’d like to claim that owning Sour Grapes will improve your standing with the opposite sex; it will cure you of any hangover; playing it loud to your neighbours will indeed boost your reputation as the coolest person in the street and best of all, buying a CD will infinitely increase the riches of the band and the record label, allowing us all to retire that little bit sooner to the tropical island we have put a deposit on.”

House Of Shakira are a Swedish rock formed by guitarists Mats Hallstensson and Anders Lundström that started out in Stockholm around 1991 under the moniker The Station. The mid 1990's saw the band change their name to House of Shakira, named after a London bordello.

In their 25 year history the band has released seven previous studio albums, all of which have left their mark, making the band one of Sweden's best known musical exports as well as hometown heroes. Their famed debut album "Lint" remains a genre classic.
The House Of Shakira line-up of Mats Hallstensson (guitars), Anders Lundström (guitars), Andreas Novak (vocals) and the blistering rhythm section of Basse Blyberg (bass) and Martin Larsson (drums) locked themselves away in the studio, in what’s become a ritual designed to produce more glorious Scandinavian melodies.

Following the albums “House Of Shakira’ and "Pay To Play"; the brilliant new “Sour Grapes” will be released worldwide via MelodicRock Records/Cargo Records on CD August 26 and via digital outlets two weeks later on September 9. 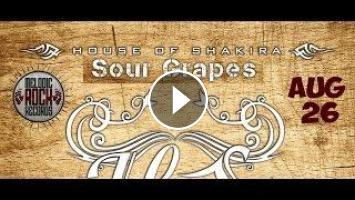 One of Sweden’s legacy melodic rock acts House of Shakira are ready to deliver the best serving of Sour Grapes you’ve ever been fed. Keeping the momen...