Added 8 years ago by vhm
159 Views
A tour ad for Dead Ends of Europe accompanied by a new song teaser! For more info, exclusives, downloads, audio, video and to download a track from Dead End Kings for FREE go to the album site to sign up to the mailing list at www.deadendkings.com.

A continuation of 2009's inspired&acclaimed Night is the New Day, Dead End Kings sees Katatonia conjure yet another milestone in audial melancholy&angst. The Katatonia of 2012 is more potent, focused and creatively impactful than ever before. Jonas Renkse and Anders Nyström - alongside guitarist Per Eriksson, bassist Niklas Sandin and drummer Daniel Liljekvist -- are at the peak of their powers right now, and their brand new studio album Dead End Kings provides incontrovertible evidence of their unstoppable artistic momentum. A rich, adventurous and endlessly evocative masterwork that exhibits all the Swedish quintet's established traits while absorbing countless fresh ideas into that monumental sonic brew, this is plainly the strongest and most beguiling album in the Katatonia catalogue to date. It also proves that sadness comes in many shades and that no one is safe from its cold allure.

"Dead End Kings represents progression and taking things to the next level," says Renkse. "The writing was a little more intense and spontaneous for this one. I think that's the biggest difference. But it was made with the same mindset as the last few albums. It justhad a little more fire involved. We don't want to repeat ourselves. We are still hungry for new music."

Dead End Kings was recorded at Ghost Ward Studios&The City Of Glass. The album was produced by Anders Nyström&Jonas Renkse,&mixed by David Castillo. Additionally, Katatonia is joined once again by Frank Default on sampling&atmospherics, plus a special guest appearance by Norwegian vocalist Silje Wergeland of Dutch legends The Gathering/ex-Octavia Sperati.

Tracklist*
1. The Parting
2. The One You Are Looking for is Not Here (with Silje Wergeland)
3. Hypnone
4. The Racing Heart
5. Buildings
6. Leech
7. Ambitions
8. Undo You
9. Lethean
10. First Prayer
11. Dead Letters
* Deluxe edition includes two extra bonus tracks

For more information on Dead End Kings, go to the album site at: deadendkings.com 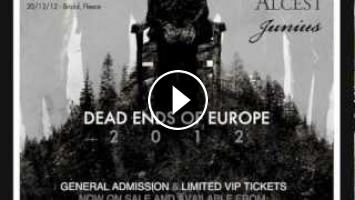 A tour ad for Dead Ends of Europe accompanied by a new song teaser! For more info, exclusives, downloads, audio, video and to download a track from De...