Here are the comments translated from Turkey's most famous blog/discussions sites..... these are not our thoughts... these are the thoughts of the people who attended the show...

"Some people are offended by their words. There are some bands that their music, stage performance and style change in time. They can get softer (generally softer) or harder. However it is clear that Manowar will always be Manowar. They are not sick of repeating the words sky, steel, brothers, return etc., but we are not sick of listening to them either. Both their style and personalities haven't changed for years."


"I think you should look at Joey Demaio's speech from two point of views:

First he says "they say the big four is here, f*** them!" Now, we can't say he was wrong; because not only in Turkey, inn every country this year's Sonisphere slogan was "for the first time in history: the big four". It's needed to be corrected, big four of what? They are the big four of trash, saying it the other way is politically worng. If there were also Iron Maiden in the list, how could you still say the big four. If you say big four and then have more bands than four, of course the other bands would have the right and say "f*** them". Joey's words were not directed to those four bands, they were directed to Sonisphere. He just wanted to point out this by also asking the fans "for whom you came here?"

Apparently, Joey Demaio thought they were humiliated when they weren't paid enough to be a headliner. Some people might see this as a sign of weakness, but he made the whole crowd approve their greatness. So obviously they are not weak, but they are right. They might be repeating their lyrics and style, but if a heavy metal band has this much of power over a crowd, it means they deserve to be the headliner in this festival."


"It is enough for me that they didn't say: "If we are not the headliner, we won't go on stage". Their show was really successful, they made the crowd go crazy and most importantly we all had fun. This is what they were supposed to do, the rest is not important.

They say Joey tried to fulfill his ego, butter up to fans by talking in Turkish etc.
Those people must be insane."

"Manowar had their show according to their traditions, without using flame, light etc. Important note to the audiences, big groups and headliners go on stage after dark, so that people won't be distracted and they can control the crowd easier. We saw that Manowar didn't need this at all."

"When Joey DeMaio kept asking to the crowd: "for which band did you come here?", everybody screamed Manowar, even the people who didn't come for them. This is success!"

"My vocal cords are all dead. I can play basketball for 2 or 3 hours, but I could never guess that I could get this much of tired in an hour. I can't go to sleep."


"Sonisphere has been the first big concert of 2010. Sorry guys, but sending flames from everywhere is not the way these things work. You have to play music, go solo and sing good. We were hungry from yesterday and Manowar fed us. Eric Adams taught us on impressing the audiences and we had scream vocal. Joey DeMaio taught us on Turkish, I heard more words in Turkish than I understood from Hayko (beril: he is the turkish singer who was on stage before you). Karl Logan's solo was more than enough for everyone."


"I don't understand why people are concerned about their words. These men have been like this for 25 years, there aren't anybody left that they haven't attacked. They care about you and talk in Turkish and come here even thought they weren't the headliner, and you are still not pleased with them. I heard people saying things like they are a teenage band and overrated. Sorry but I think there was another group in this festival that was a real teenage band and their last two albums were overrated. At least Manowar's fans are definite." 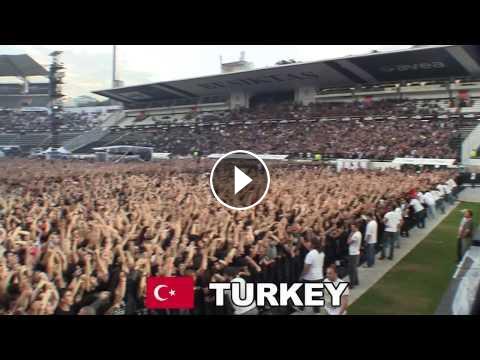 Manowar perform in front of over 75,000 people in 3 shows. Here are the comments translated from Turkey's most famous blog/discussions sites..... thes...