Added 4 years ago by vhm
84 Views
DIE APOKALYTISCHEN REITER announce European tour. In the context of "The Greatest Of The Best European tour 2012", with 20 stations in England, France, Spain, Italy, Belgium, Netherlands, Austria, Switzerland and Germany, they will tour together with two different Band Line Ups.

For the tour start on the 21.04.2012 at the Durbuy Rock Festival in Belgium, Germanys Cult-Alternative Rockband EMIL BULLS will join the Tourbus and will be with DIE APOKALYPTISCHEN REITER for eleven shows in Benelux, France, UK, Spain and Italy as the Main Support.

EMIL BULLS are probably one of the figureheads in the German alternative-rock-scene and are standing for an explosive live-show. Their recent album "Oceanic" which chartet in Germany on #16, is the most successful album in their long lasting band history.

For the shows in the German speaking area, means Germany, Austria and Switzerland, was the band KONTRUST chosen. KONTRUST, with the head quarter in Vienna, caused quite a stir in the past two years with their extraordinary live-shows and unusual video-clips, also over the borders of Austria. One of the highlights probably was their performance at the polish Woodstock-Festival infront of over 100.000 people last summer. In the Netherlands reached KONTRUST with their album the national charts.

The position for the Opening Act for the whole Europe tour was filled by the 5 Danes of MALRUN. With their debut album "Beauty In Chaos" they got good press-echoes of the Metal-Media from all over Europe and they stand for melodic, modern Metal.

Tickets are available at all known ticket agencies. 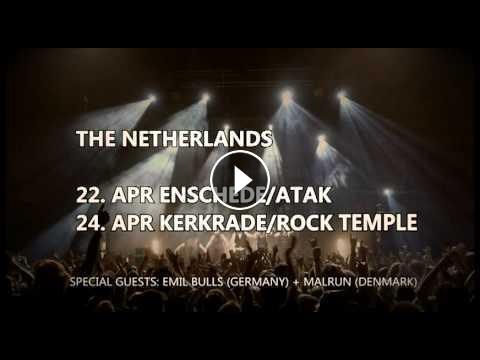 DIE APOKALYTISCHEN REITER announce European tour. In the context of "The Greatest Of The Best European tour 2012", with 20 stations in Engla...