Added 5 years ago by admin
77 Views
British rock 'n' rollers THE TEMPERANCE MOVEMENT have released a revolutionary new music video for the title track of their new album, "White Bear". The band teamed up with famed photographer, filmmaker and multimedia artist Steven Sebring, who created the spectacular 'White Bear' album cover and has worked with the likes of Patti Smith, Neil Young, Joey Ramone, Alec Baldwin, Philip Glass, JFK Jr. and Bill Gates. He has also won a 2008 Sundance Award for Excellence in Cinematography and earned a 2010 Primetime Emmy nomination. To create the mesmerising visual masterpiece, the video was filmed with Steven Sebring's innovative Revolution system - a one-of-a-kind process that captures form and movement from every angle, resulting in stunning 3D imagery with unparalleled depth.

Steven Sebring comments: "The Revolution system allows us to manipulate time and light to capture the true essence of the body and spirit of the subject. The Temperance Movement embraced and embodied my vision and this is the result."

THE TEMPERANCE MOVEMENT bassist Nick Fyffe adds: "I had met Steven a few years ago. He was making a video for a mutual friend whose band I was in at the time. We remained in touch and when passing through New York last year, Steven graciously agreed to take some photographs of the band. We visited his studio where we were introduced to his Revolution system and invited to enter the 'fourth dimension'. Steven came to the show later that evening and when hanging out afterwards, we started to chat about the White Bear album and how we could involved him. He shot the cover artwork a few weeks later and delivered an image that exceeded our expectations. The idea of doing the White Bear video using the Revolution system was an exciting prospect and the results are stunning. Our connection with Steven has given us the opportunity to make a visually beautiful piece of work using techniques that haven't been seen before." 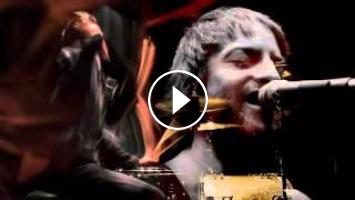